The El Nino effect, which can drive droughts and flooding, is under way in the tropical Pacific, say scientists

Australia’s Bureau of Meteorology predicted that it could become a “substantial” event later in the year.

The phenomenon arises from variations in ocean temperatures.

The El Nino is still in its early stages, but has the potential to cause extreme weather around the world, according to forecasters.

US scientists announced in April that El Nino had arrived, but it was described then as “weak”.

Australian scientists said models suggested it could strengthen from September onwards, but it was too early to determine with confidence how strong it could be.

“This is a proper El Nino effect, it’s not a weak one,” David Jones, manager of climate monitoring and prediction at the Bureau of Meteorology, told reporters.

“You know, there’s always a little bit of doubt when it comes to intensity forecasts, but across the models as a whole we’d suggest that this will be quite a substantial El Nino event.” 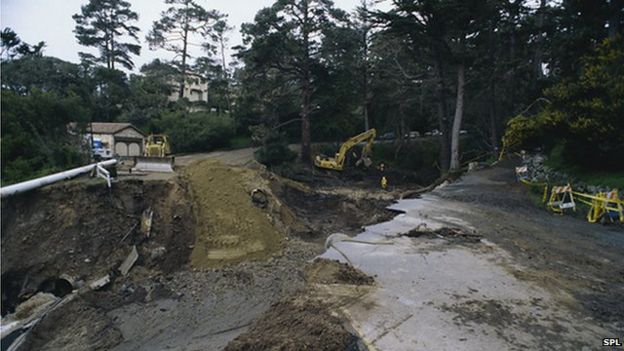 Aftermath of flooding in California put down to El Nino

An El Nino comes along about every two to seven years as part of a natural cycle.

Every El Nino is different, and once one has started, models can predict how it might develop over the next six to nine months, with a reasonable level of accuracy.

How can we predict El Nino?

In the tropical Pacific Ocean, scientists operate a network of buoys that measure temperature, currents and winds. The data – and other information from satellites and meteorological observations – is fed into complex computer models designed to predict an El Nino. However, the models cannot predict the precise intensity or duration of an El Nino, or the areas likely to be affected. Researchers are trying to improve their models to give more advance notice.

A strong El Nino five years ago was linked with poor monsoons in Southeast Asia, droughts in southern Australia, the Philippines and Ecuador, blizzards in the US, heatwaves in Brazil and extreme flooding in Mexico.

Another strong El Nino event was expected during last year’s record-breaking temperatures, but failed to materialise.

Prof Eric Guilyardi of the Department of Meteorology at the University of Reading said it would become clear in the summer whether this year might be different.

“The likelihood of El Nino is high but its eventual strength in the winter when it has its major impacts worldwide is still unknown,” he said.

“We will know in the summer how strong it is going to be.”

The El Nino is a warming of the Pacific Ocean as part of a complex cycle linking atmosphere and ocean.

The phenomenon is known to disrupt weather patterns around the world, and can bring wetter winters to the southwest US and droughts to northern Australia.

The consequences of El Nino are much less clear for Europe and the UK.