I acknowledge receipt of your letter dated 15 September 2014 (received 22 September 2014).  Your letter was discussed at the Effingham Parish Council meeting held on 30 September 2014 and Councillors are very seriously concerned about the assertions you make in the letter.

We cannot accept that negotiations on the settlement boundaries for Effingham held between us on 31 March 2014 can be totally torn up and replaced in such a short time without good reason.  You have failed to provide any evidence as to why such a major policy change took place and your argument on “defensible boundaries” is in itself not defensible!

You claim that you made changes to the Effingham settlement boundaries in order to use “defensible boundaries”.  It appears you have been badly advised.  At our meeting on 31 March 2014 we all agreed that the settlement boundaries you proposed to Cllr Ian Symes and I were defensible in that they followed the current Effingham settlement boundaries with some very small additions. You specifically excluded the Effingham Lodge Farm Site (Site 69) saying it was outside the scope of changes proposed for the Local Plan. However in spite of our negotiations Effingham Lodge Farm has now been included in the Settlement Area and the Boundary is not defensible.. Paragraph 85 of the NPPF states that when defining boundaries use physical features that are readily recognisable and likely to be permanent, but the boundaries proposed in the draft Local Plan are not readily recognisable nor likely to be permanent.  For evidence please see the attached Local Plan submission on Site 69 from Roland McKinney, Woodlands Road, Pages 5-6, and this view is supported by Effingham Parish Council.

“Parts of this site boundary that would be included as part of the new Green Belt boundary include the northern section from Effingham Common Road across Effingham Lodge Farm with the proposed Green Belt boundary approximately across the centre of the photograph shown – there are no features whatsoever, this is an open green field.

Until the boundary meets these footpaths, there are no physical features….”

In addition there is no justification for including the Brown’s Field site in the Local Plan. This is a sensitive site for villagers and is part of the Conservation Area. It should be noted that  Effingham Parish Council has taken a formal resolution to designate this site as a Local Green Space as part of our Neighbourhood Plan process.

You also assert that the changes to the boundaries are “to allow for appropriate development particularly at Howard of Effingham School, which is in dire need of investment in its fabric…”  On what evidence do you make this assertion?  Effingham Parish Council has held regular joint meetings with the Howard of Effingham School, Berkeley Homes, GBC Planning Officers and SCC Highways Officers for some months.  We have yet to see any evidence of “dire need”.  Indeed, I do not believe your officers have seen any such evidence.

We raised the issue of pre-determination of this planning proposal in our previous correspondence to you. You appear to have ignored this advice.

As you might expect, Effingham Parish Council and many of our residents have responded to the Local Plan consultation.  Guildford Borough Council needs to undertake further research to fill the many gaps in the plan and to correct inaccurate data.  It is then essential for you to ensure the revised draft Local Plan reflects the views of the Guildford Borough residents and that a further consultation is carried out before the plan is finalised.  I am sure you are frustrated that the plan is being delayed, as we are, but it is vitally important that we get it right for the benefit of our communities.

Some of the issues other than those discussed above are considered below.  Green Belt consideration by Pegasus and GBC was not based on individual site analysis and this was duplicitous, given the importance of assessing individual sites.  Their development would have a profound impact on their near neighbours and so sites should have been assessed individually, instead of using general areas.  This analysis is based mostly on Effingham Lodge Farm, but ideally all three sites would be considered individually, as the GBC analysis should have been.

“The Framework (the NPPF) makes clear that a Green Belt boundary may be altered only in exceptional circumstances and reiterates the importance and permanence of the Green Belt.  The special role of the Green Belt is also recognised in the framing of the presumption in favour of sustainable development, which sets out that the authorities should meet objectively assessed needs unless specific policies in the Framework indicate development should be restricted.  Crucially, Green Belt is identified as one such policy.”

This reaffirmed a point made earlier by Brandon Lewis MP, in a written ministerial statement on the Green Belt, dated January 17th, 2014.  This statement clarified the position with regard to unmet need, though it was less clear on the subject of Green Belt boundary revisions.  This said (in part):

“I also note the Secretary of State’s policy position that unmet need, whether for traveller sites or for conventional housing, is unlikely to outweigh harm to the Green Belt and other harm to constitute the “very special circumstances” justifying inappropriate development in the Green Belt.”

Sections of this site boundary would form part of the entirely new Green Belt boundary, and the suitability of this has not been assessed.  According to the NPPF (paragraph 85), when Green Belt boundary revisions are being considered, it is essential to:

“…define boundaries clearly, using physical features that are readily recognisable and likely to be permanent” (NPPF). 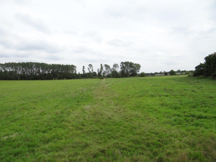 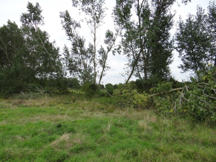 Parts of this site boundary that would be included as part of the new Green Belt boundary include the northern section from Effingham Common Road across Effingham Lodge Farm with the proposed Green Belt boundary approximately across the centre of the photograph shown – there are no features whatsoever, this is an open green field.

Until the boundary meets these footpaths, there are no physical features, just biological features – tree lines and woodland.  Statistics from the Woodland Trust show that these are unlikely to be permanent – ancient woodland in England is being lost at a rate faster than Amazon rain forest; the area of ancient woodland lost in the past 80 years is equivalent to the area that remains today.  Treelines in particular are subject to wind damage, as shown in this photograph; disease; and removal by land owners.  These simply cannot be considered to be permanent or physical features.

From FP 119a, the site boundary then crosses Lower Road, crossing the existing school site, following the boundary between GBC and MVDC.  Part of this section again crosses an open green field, with no feature of any description until it reaches a hedge, a biological feature.

Thus when considering the part of this site boundary that would become a new Green Belt boundary there is only one quite short section that may meet the criteria of the NPPF, that is, physical features, likely to be permanent – these are the public footpaths FP76 and FP119a.  No other section meets the NPPF criteria and there are two completely open sections.  It would make nonsense of the NPPF if these were to become part of a new Green Belt boundary around Effingham.

Consideration 2:  Within 5 km to 7 km of the Thames Basin Heath SPA.

The information provided by GBC for this site in the draft Local Plan was inaccurate as it states that the site is beyond the zone of influence of the Thames Basin Heath Special Protected Area at Wisley Common.  This is not accurate, and is duplicitous.  Part of the Effingham Lodge Farm site is within 5 km of the SPA, and so for development to occur on this part of the site an alternative recreational site must be provided.