The recent application by Berkeley homes and the Howard of Effingham School for relocating and expanding the school, to be funded by the creation of 295+ houses contains a number of claims to justify. An investigation made by EFFRA into the claims made by the planning application, with input from the former head of Property of the largest private schools group in the world and the former Head of Education at a County Council, has identified the following key points:

The planning application claims that “… there are no other sources of funding …,” but there is a core source – the Department for Education (“DfE”). Via Freedom of Information Requests we have found that they were asked in July 2013 to fund the acquisition of the Lower Farm site and a new replacement school. They have politely not responded – effectively declining simply because of 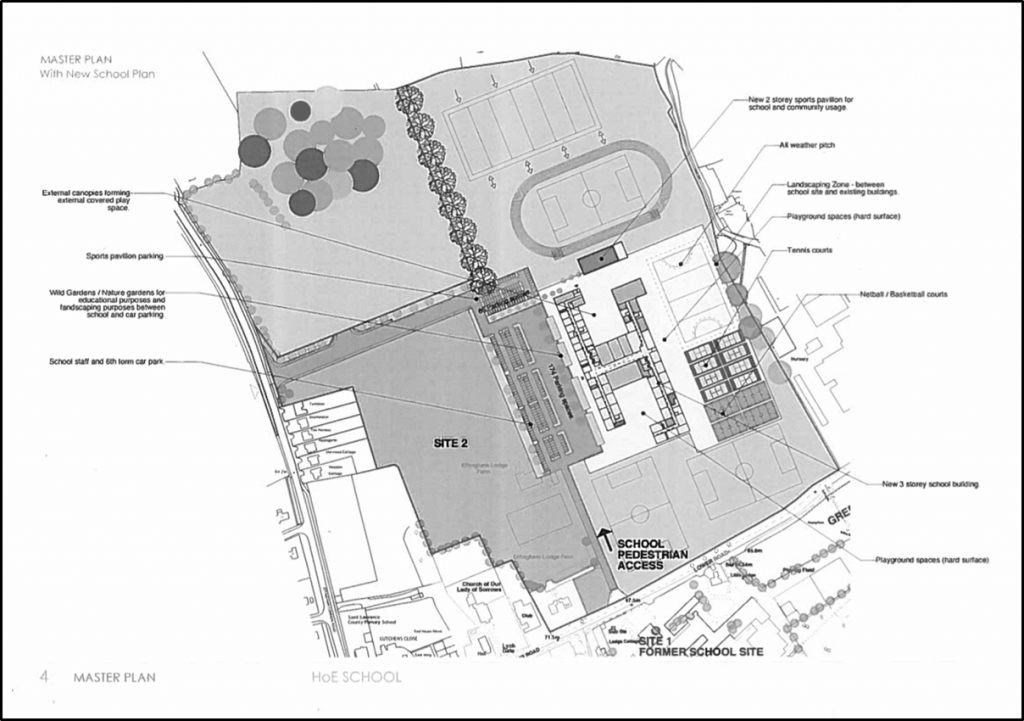 Our own calculations using the industry norms (a document issued by the DfE in July 2014 called ‘Building Bulletin 103’) shows that the school actually has over 100% of the space it needs to fulfil the specification of a school of the existing size. As the KGV’s clear principal is to provide playing fields and no statement has been made by the school saying that they are under any threat – we wonder what justification there is for a new school due a claimed lack of playing fields.

3) The Condition of the Buildings

The Planning Application claims that “… the buildings are in poor condition …,” but Freedom of Information Requests of the DfE revealed that a survey of the buildings was undertaken by them in July 2013 which showed that the condition of the majority of the buildings was good or satisfactory (Source : the Education Funding Agency, part of the DfE, reference “Property Data Survey – 136833/4036 – Howard of Effingham School”, dated 26/07/2013). 66.3% was rated as ‘Good’ and 22.7% was rated as ‘Satisfactory’. 37% have been built since 1967 and only 3% by floor area was graded as Temporary. Its buildings are newer and better than many other schools in the area.

Equally, when the previous owners of the premises – Surrey County Council – owned this campus in 2011, the assessment of repairs needed to the buildings showed a level of £710,000 needed to be spent of which nearly a half was planned regular maintenance. If it is as bad as is stated, how has this occurred since the property was transferred across?

It is accepted that some Temporary buildings (3% of the school campus by area) are being used which in an ideal world could be upgraded. However, that is only small percentage of the whole campus and no attempt at focusing on this area for capital funding appears to have been made.

4) Parental Choice and Proximity of Other Schools

It is claimed that “… the nearest school is the George Abbott [ 8.4 miles away] and the St Peters Catholic School [7.1 miles away]…” Any person living in the area will know that the existing Therfield school in Leatherhead is only 4.5 miles away and has surplus spaces or the (Source: SCC and OFSTED) and the existing Ashcombe School in Dorking is only 6.9 miles away. The new Free School in Cobham will be only 5 miles away and all are closer.

The Therfield School has been rated as ‘Good’ by OFSTED where there is spare capacity and the Ashcombe School has also been rated as “Good”. There is also a new Free School proposed for the eastern edge of Cobham and another in Pyrford / South Woking – both of which have had their funding approved by the DfE (source: DfE) and are progressing, (which will reduce the size of the catchment area of the Howard of Effingham School).

There are two other plots identified by GBC for a new secondary schools closer to where SCC have identified future need on the eastern and northern side of Guildford.

5) Claims the land has been allocated

It is claimed that “… the land has been allocated ….” We understand that in fact the Applicant has made a request to Guildford BC with an aspiration for the land to be included in a Strategic Housing Land Allocation Assessment (“SHLAA”) and because of that it has been included in their list. This list includes several sites which will never achieve Planning Consent and GBC are very clear that “… the inclusion of land in the SHLAA does not imply that the Council will grant Planning Permission for a housing development or allocate the land for housing … .” We view it as very misleading for the Applicant to state that the land has been ‘Allocated’ when actually it is only identified as a proposal by the Applicant.

6) Need for a Larger School

Finally, Freedom of Information Requests to Surrey County Council have established that for every year in the last five years every child living in the catchment area applying for a place has been accepted. In 2015 the school met every demand for a place from the catchment area and was able to meet some from outside. This logically means that any expansion of the pupil numbers will have to come from outside of the existing catchment area – which is likely to shrink as and when the already funded new schools arrive – which simply add to the congestion on the roads. A more localised delivery of service i.e. a school closer to where the pupils live will reduce congestion.

A simple review of the facts as ascertained by independent third parties shows that many statements made in this Planning Application are open to question. We urge people to consider the consequences if this planning application is passed, which could very easily lead to a partially used school, extra congestion on the roads and unnecessary destruction of green fields. Certainly have the right schools and housing in the right place, but not here in the wrong place!