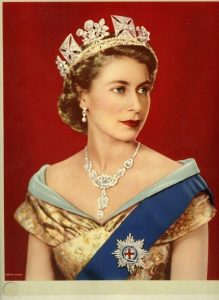 When Queen Elizabeth came to the throne in 1952 following the death of her father King George VI, England was still financially and emotionally exhausted by the War. Life was not easy with rationing still operating, shortages of many everyday items, few consumer goods available and lack of housing. Yet there was a spirit of optimism after winning the War and in a few years the economy would boom, wages would soar, employment would all but disappear and life would become more comfortable as more consumer goods and home appliances were developed and became affordable. 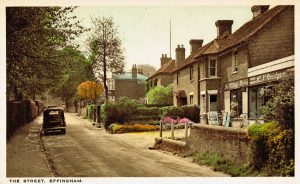 Effingham was similarly still showing the after effects of the War. The 1962 Surrey edition of The Pevsner Architectural Guides to the Buildings of England called Effingham “a battered village of small old cottages, suburbanized since 1930” and in 1952 it would have been even more battered. 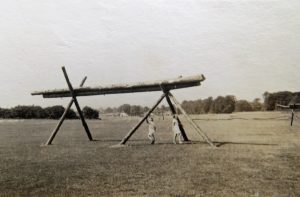 Troops had been billeted in Effingham and camped on Ranmore. Houses where they were billeted like Yew Tree House and Grove House were left in a poor state, there was bomb damage and remnants of bomb shelters and military installations around the village and on Ranmore. 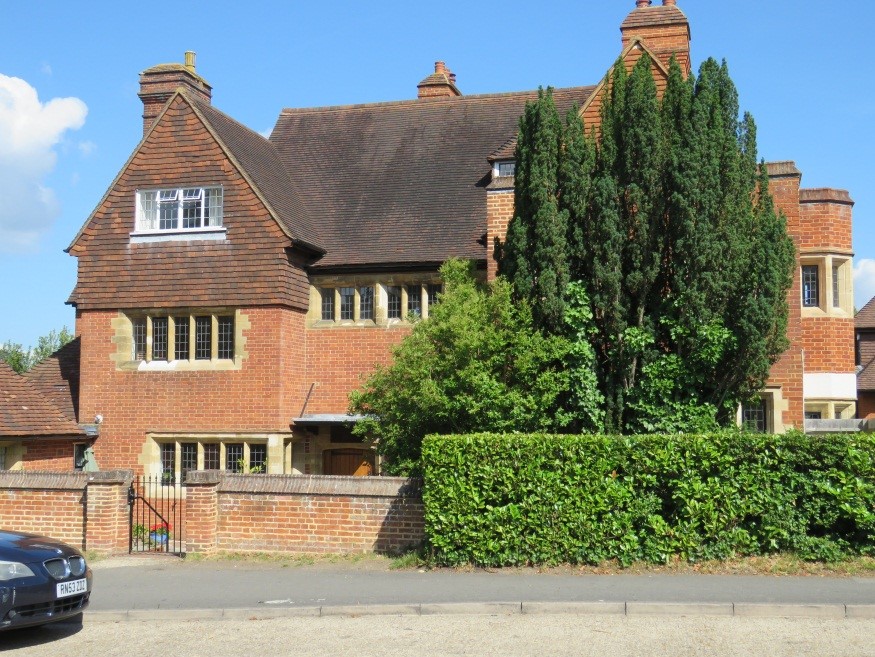 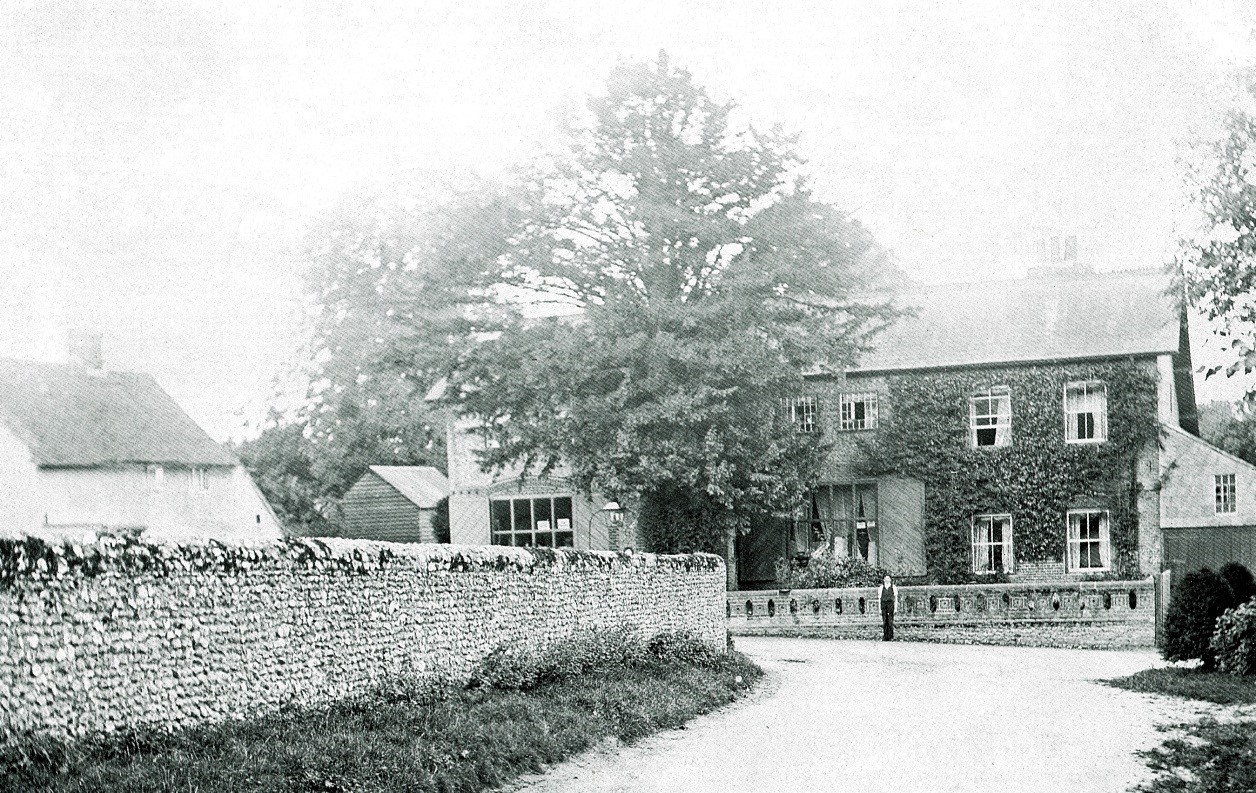 Since 1952, some old buildings have been demolished, including Yew Tree House near the shops (photo right looking from Crossways) and an old cottage on Lower Road. Others have since changed their use. The Red House (pictured above in a recent photo) was then a Roman Catholic convent called Corpus Domini and The Lodge (now part of Effingham Place) was the Surrey County Council Home for Epileptic Women 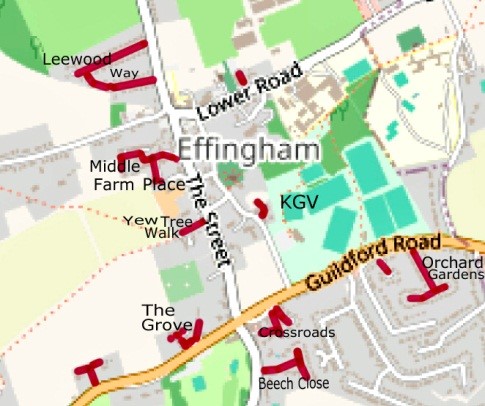 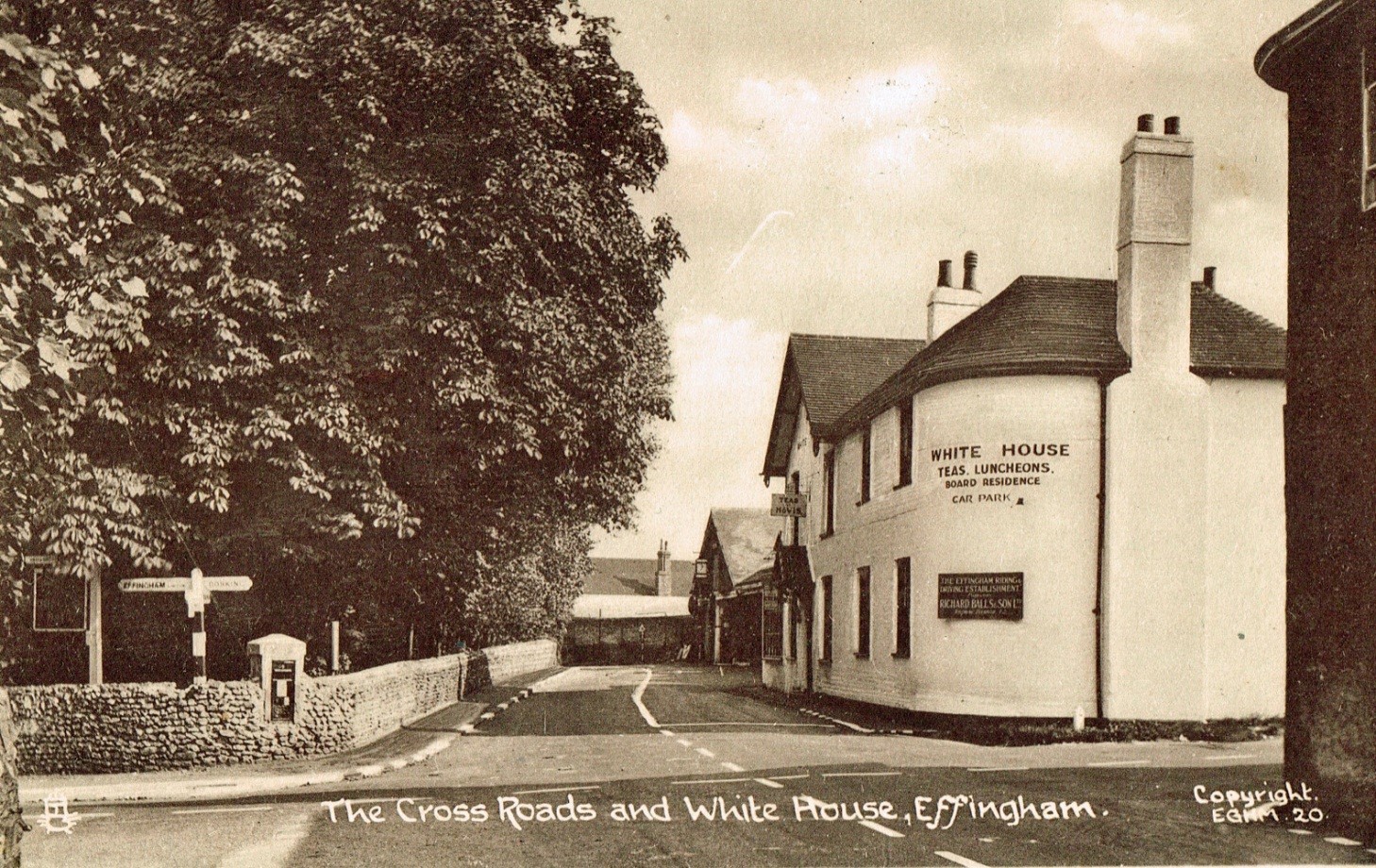 People complain about the narrow village roads and parking now but the roads were even narrower in 1952. Guildford Road and Orestan Lane were later widened.

The A246 or Guildford Road looking east from the traffic lights junction before widening. Land was purchased from Browns Field and the KGV to widen the road and the old road seen here is now the road in front of TW White & Sons. 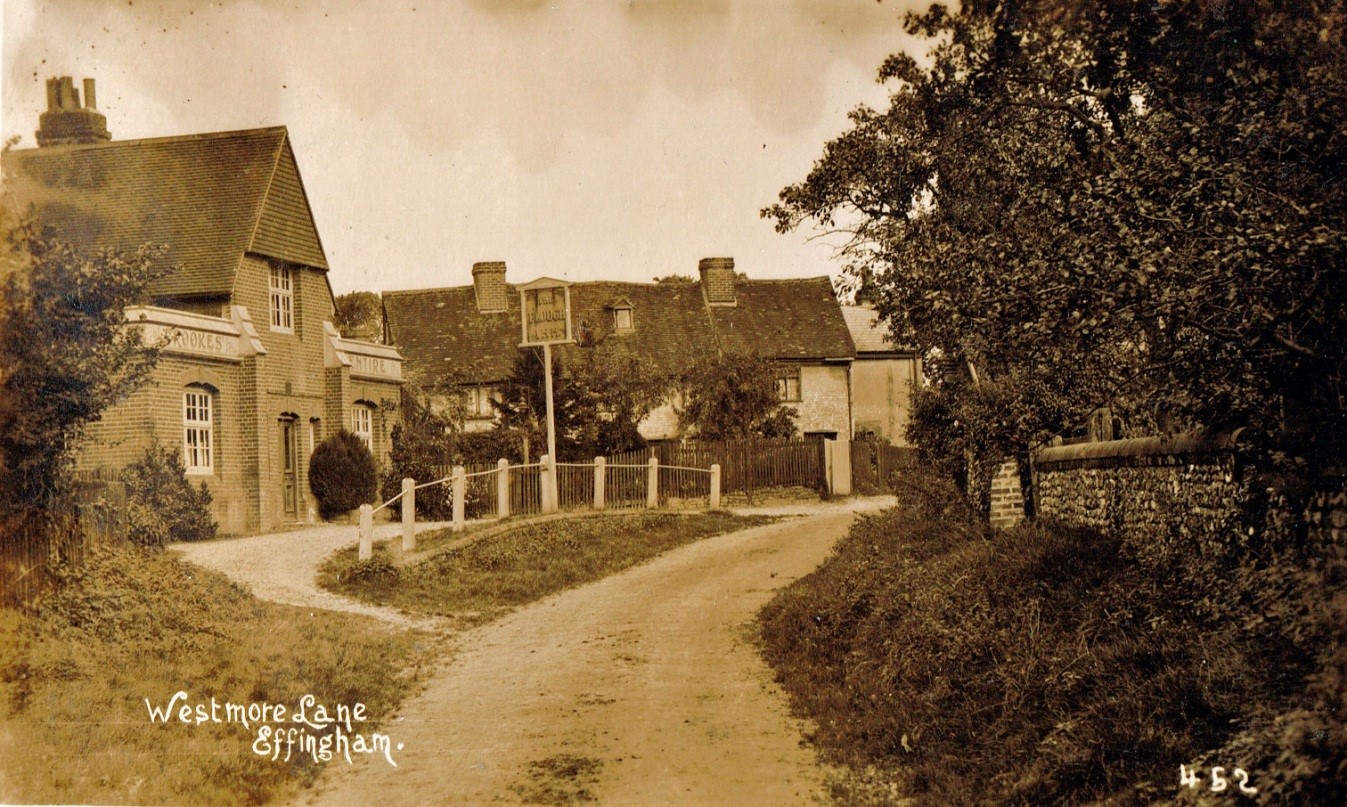 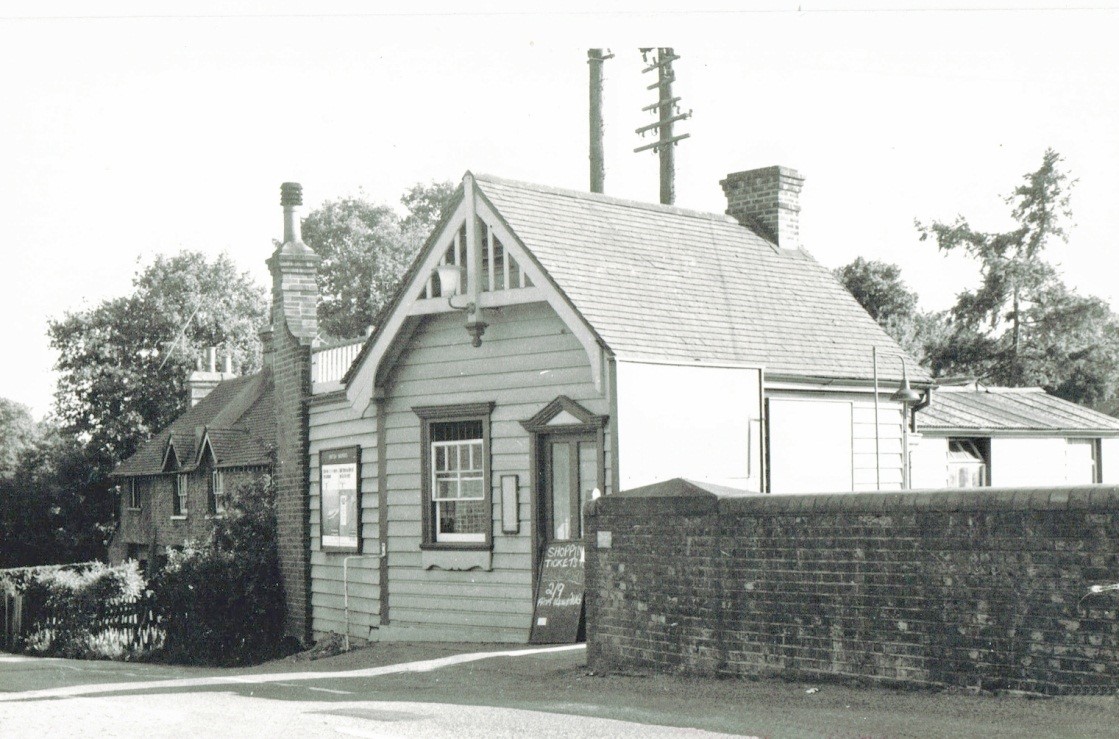 Effingham Junction ticket office now demolished. The station houses beyond it were also later demolished to make way for the station carpark.

But car ownership was much lower. Over 80% of households didn’t have a car. People walked, cycled or used public transport which was much better then. The train journey to London from Effingham only took 35 minutes and trains were every 20 minutes. So much for progress! 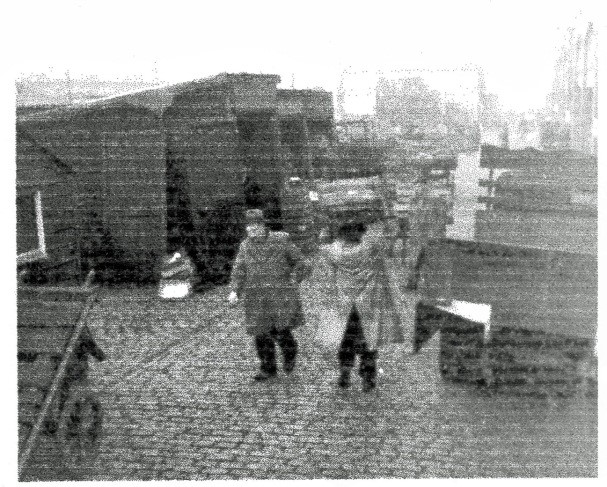 Many men commuted to office jobs in London, Guildford and Leatherhead, but many still worked in agriculture or trades connected with it.
Horticulture and market gardening on Effingham Lodge Farm.

There were many working farms in Effingham for sheep and dairy and a large pig farm in Calvert Road. 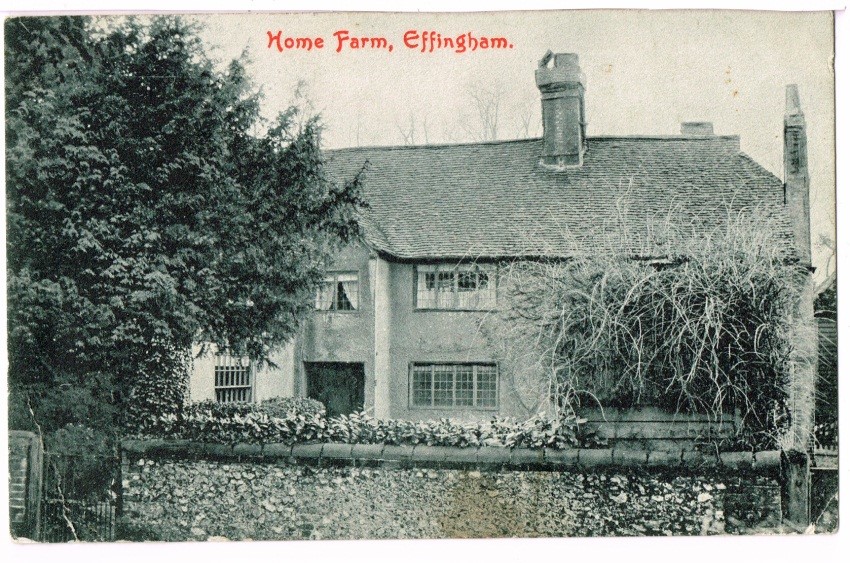 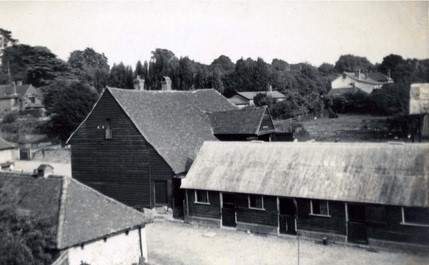 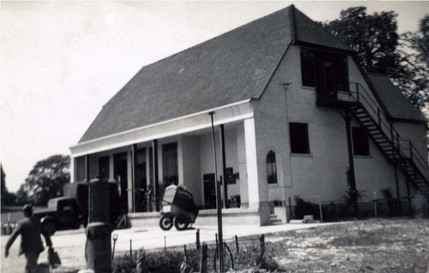 Home Farm was a large dairy business being run by the Curtis family in 1952, which was sold to Home Counties Dairies in 1955 which expanded it further until it closed in the 1970s. 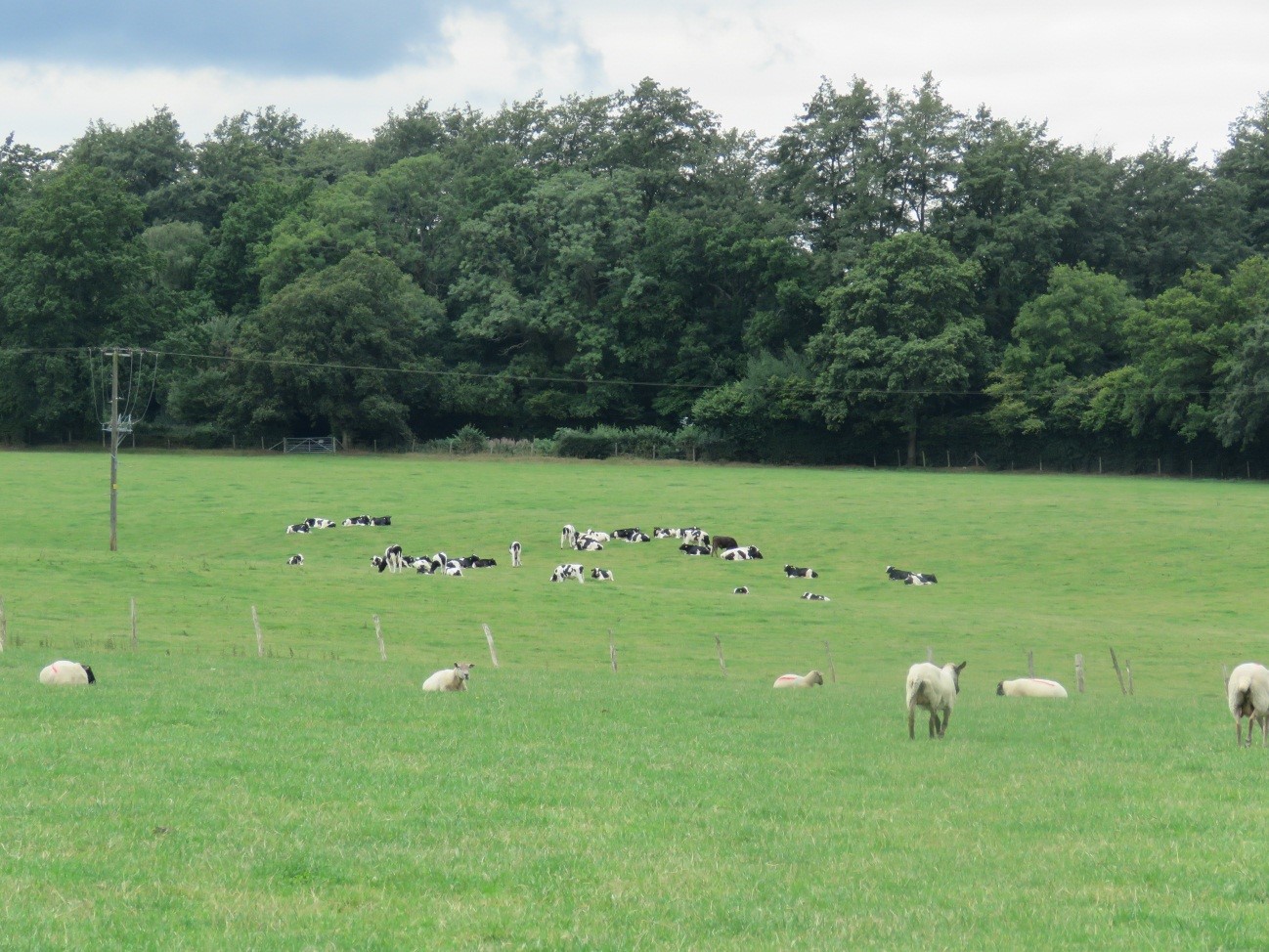 The photo is of sheep and cattle grazing recently in southern Effingham. 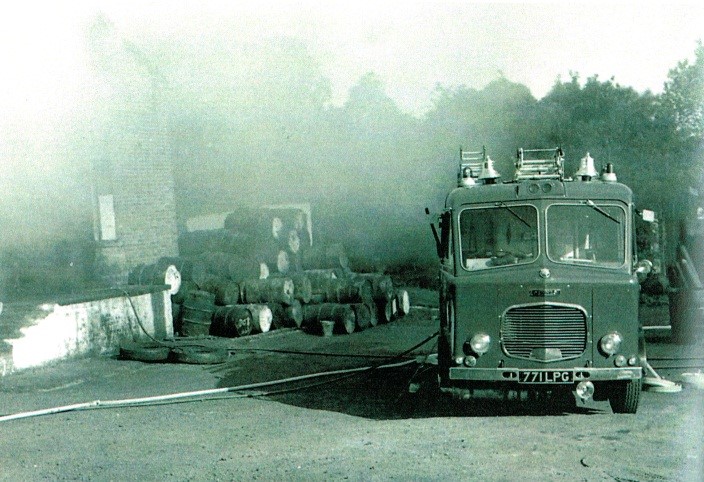 A “fat factory” operated in Orestan Lane extracting fat from animal carcasses which in 1952 was beginning to cause the village problems from the smell, noise and nuisance. It closed in 1974. 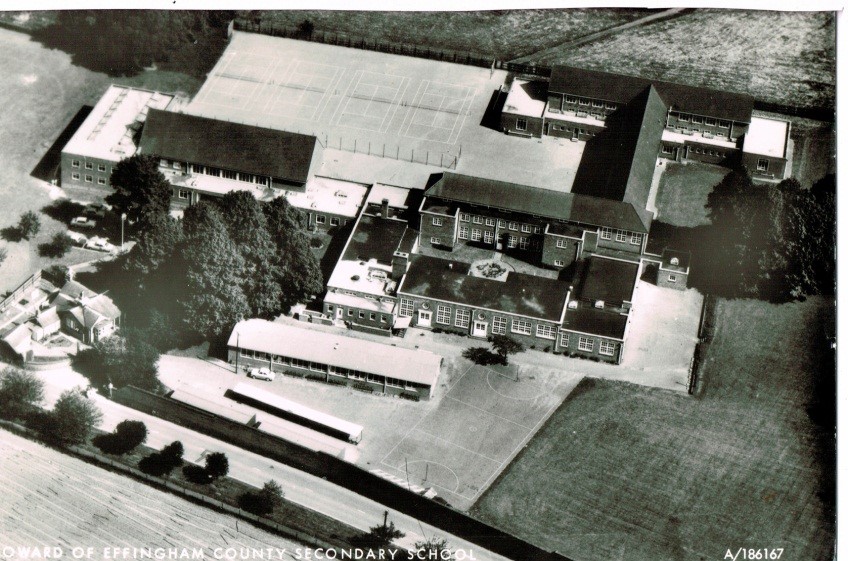 Few married women worked. Domestic tasks were more time consuming then without labour saving gadgets such as fridges, vacuum cleaners and washing machines. Few villagers could have afforded even the earliest versions. Children were walked to and from school. St Lawrence was then the Effingham County Primary School. The Howard of Effingham County Secondary School had been opened in 1939 and was about half its current size. 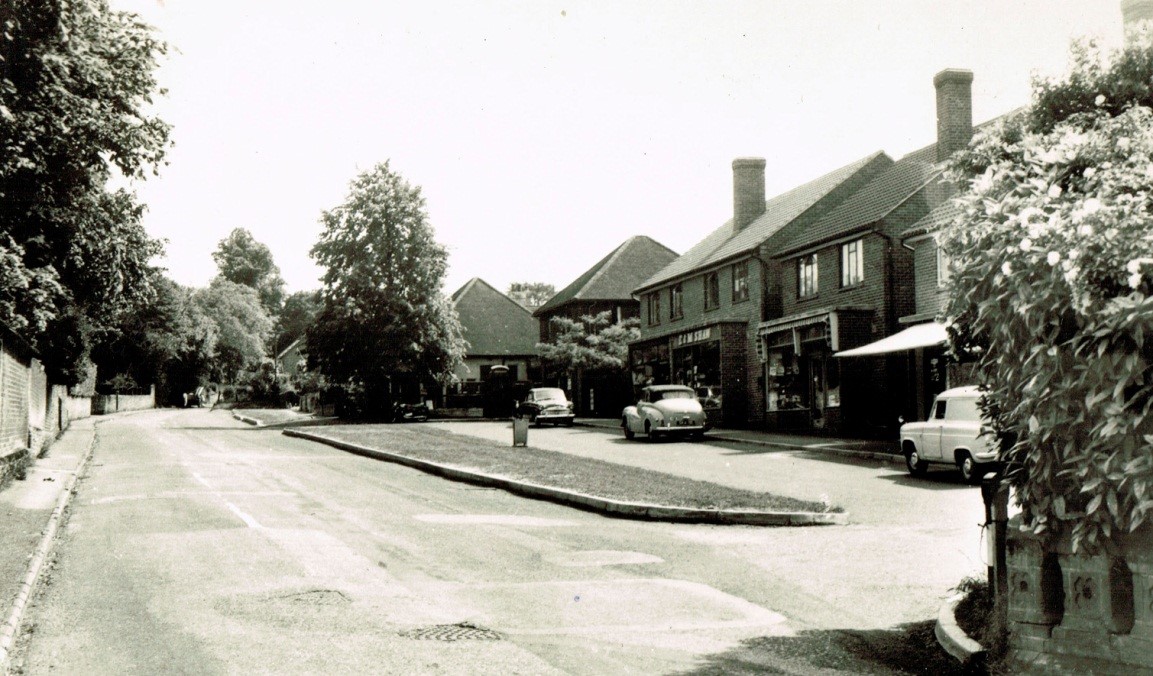 Shopping was a daily task carried out on foot to local shops with supermarkets being a thing of the future.
The Laurels on The Street was becoming the main shopping area after the post office moved there in 1951 – there were already the butchers and other shops there including The Village Store run by the Ransoms. But there were other shops scattered around the village so that it was never far to walk to one, including a number at Covey Island (where Sibleys was until recently), The Halt shop and tearoom at Effingham Junction and shops in Orestan Lane, Woodlands Road, Salmons Road & Calverts Road. 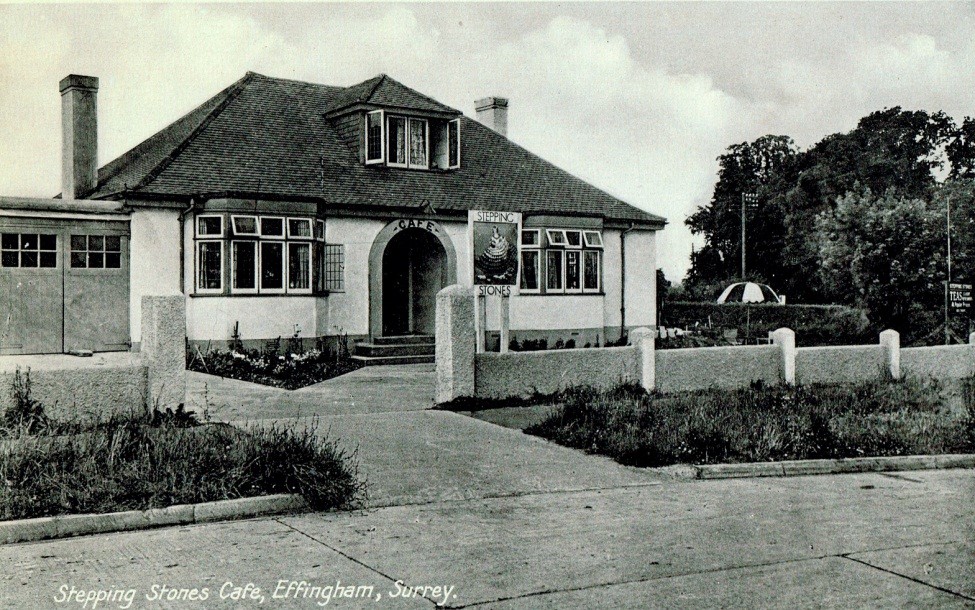 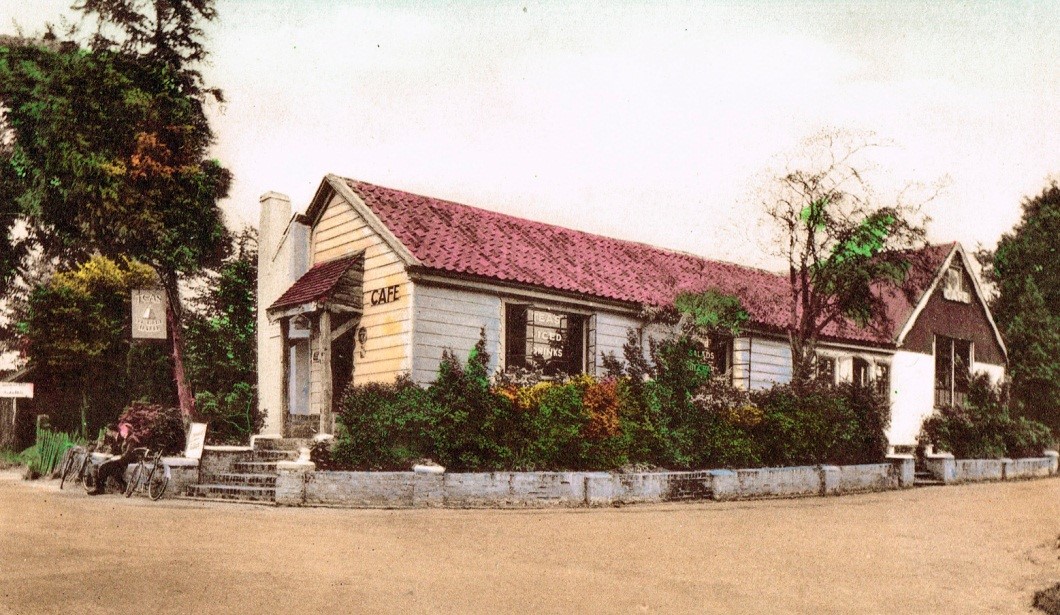 There were a number of cafes which were popular not only with villagers but also with hikers, cyclists and visitors as the area was a popular destination and an easy train ride from London known as “the Great Smoke” at the time because of smog. 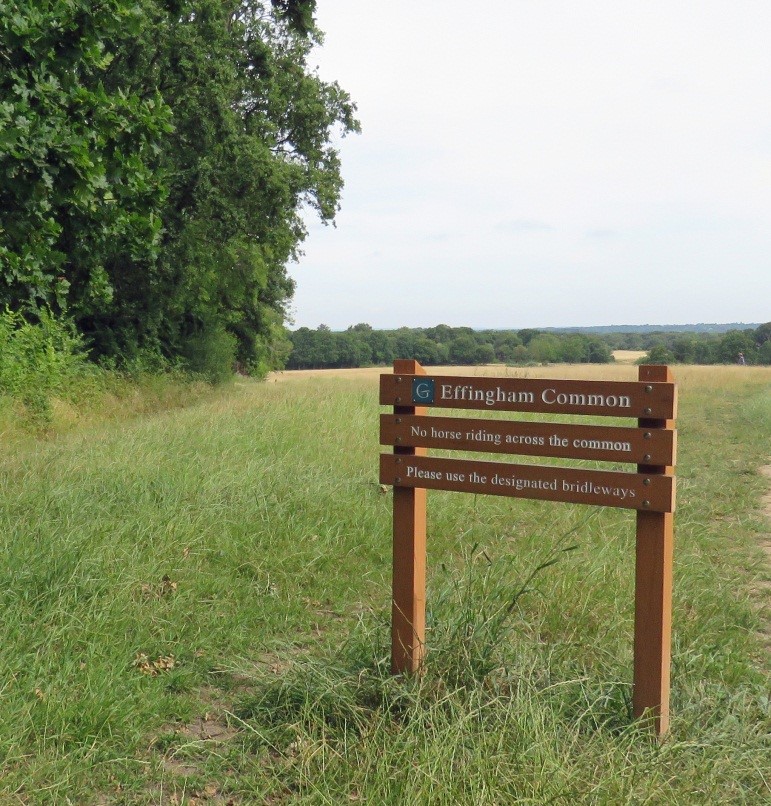 Like the KGV, part of what we call Effingham Common (actually Effingham Common and Hooke Common) was requisitioned for agricultural use during the Second World War. But that would not have been possible if Guildford Rural District Council had not refused a planning application in 1937 by Robert Reitmeyer Calburn, (the Lord of the Manors of Effingham and Effingham East Court and owner of the Common), to build on the part near the station and we would not have the stunning Common we have today. 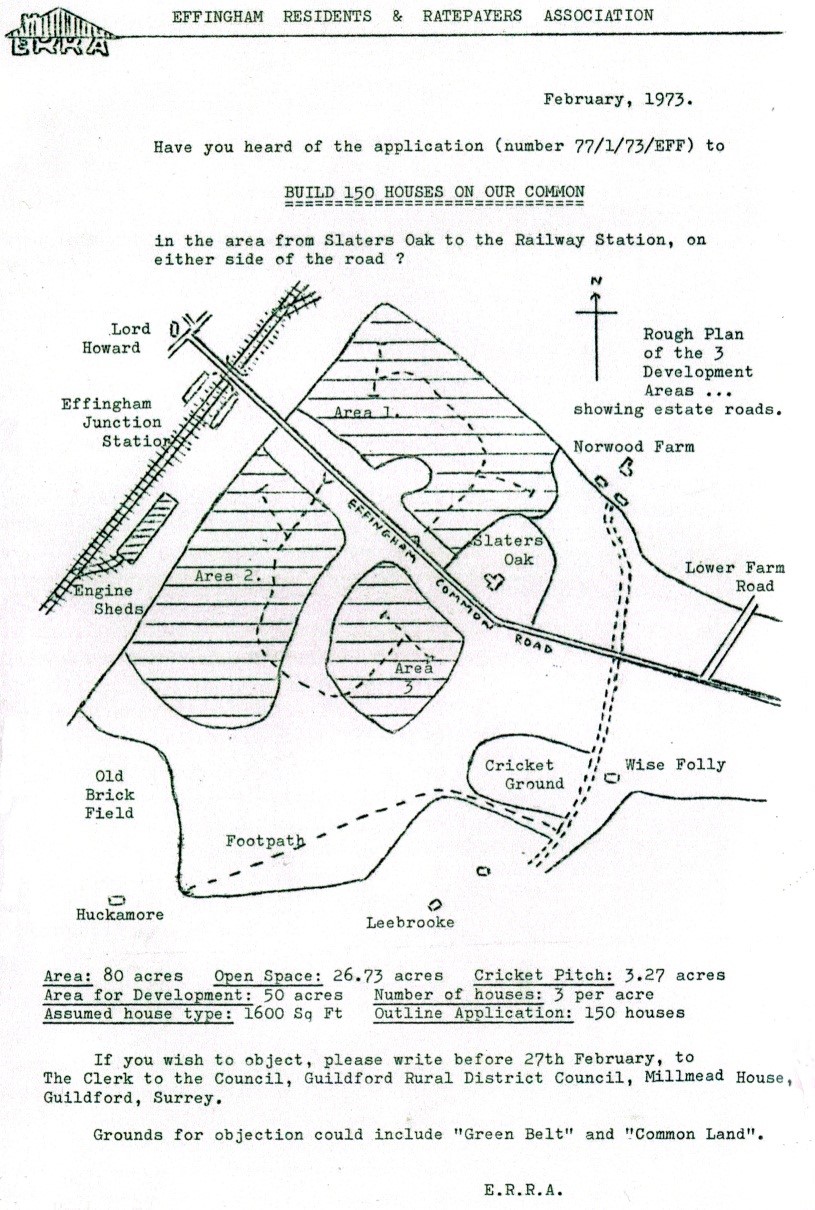 The War temporarily halted a dispute between the Council as to whether commoners’ rights still pertained and the Common was “public open space” or whether as Mr Calburn thought, it was his land to build on.

What might have been. A plan from 1973 of 150 houses proposed to be built on the Common. 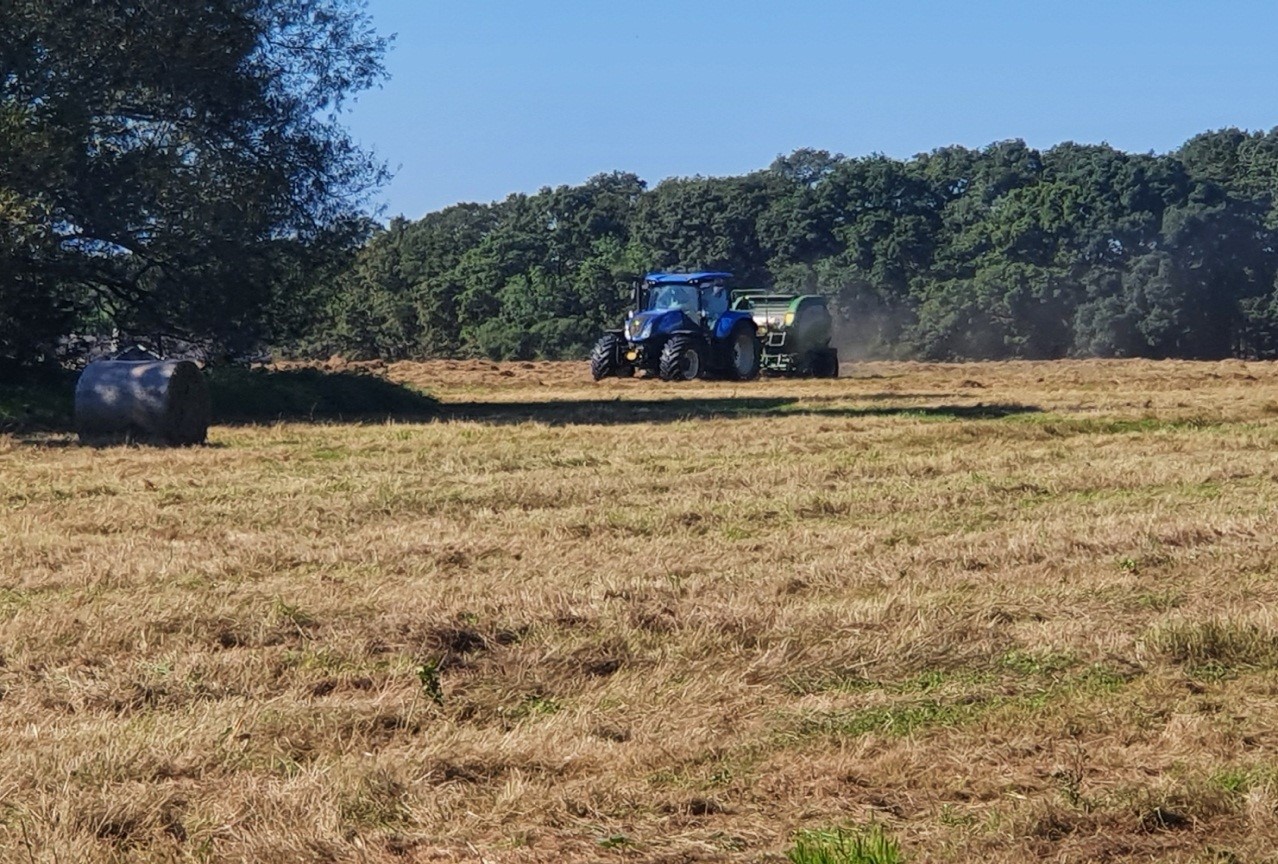 In 1952 the requisitioned area was still being used for agriculture, with Hooke Common being ploughed mainly for corn and wheat and the dispute was in temporary abeyance. It would flare up again in 1955 after the requisitioned area was de-requisitioned and after a campaign led by the Parish Council and some extraordinary residents, the legal case was won in 1976. Guildford Borough Council then bought most of the Common in 2003 and it is now safeguarded as common land.

The Parish Council in 1952 was chaired by Barnes Wallis, who had joined it in 1946 in order to see the ownership of the KGV Playing Fields transferred to it. The Vice Chairman was the Rev. JW Reynolds, the Vicar of St Lawrence Church, although in May 1952 Clifford Francis who lived at Vine Cottage in The Street took over from him. Other parish councillors were HF Flack, Henry Tyrrell (who lived at Glencar in Orestan Lane and came of an old Effingham family), Geoffrey Johnson (who lived at Manor Barn House, owned Browns and built the row of five shops at The Laurels on The Street) and Mrs Bristow (who lived at Thornets in Lower Farm Road).

Barnes Wallis called a public meeting to organise Festivities for the Coronation in 1953 but only 12 residents attended!

As well as the KGV, the Parish Council was involved in bringing main drainage to the village as there were regular reports of overflowing sewage on The Street, Station Road (now Effingham Common Road) and Orestan Lane. 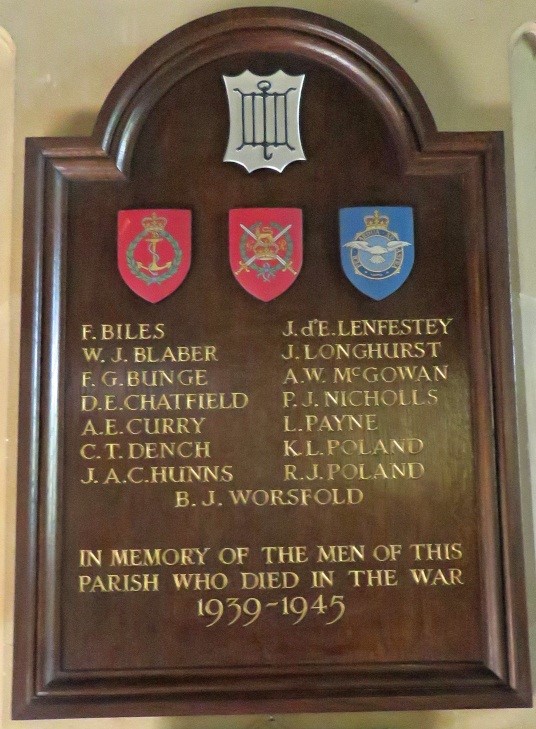 Among other organisations then very active in the village were the Women’s Institute, the British Legion and the Scouts. (The Residents Association would not be formed until at least 1962).

The Reverend John Walter Reynolds was the Vicar of St Lawrence from 1943 to 1963. Geoffrey Johnson and Mrs Bristow who were Parish Councillors were also members of the Church Parochial Church Council (Barnes Wallis had resigned during the War). In 1952 the PCC was looking at how to commemorate the residents of Effingham who had died in World War 2 (see photo left).

The Parish Priest at Our Lady of Sorrows was Father Herbert William Loader. He was the priest there from 1939 to 1975. The land that became the King George V Playing Fields was originally the park belonging to The Lodge. It had been bought in 1938 after public fundraising by a committee of residents which included Barnes Wallis. During the Second World War much of the fields were requisitioned for agriculture and in 1952 nine acres were still requisitioned until Michaelmas 1954 (shown in pink on the plan) and used for grazing cows. The rest was used for sport and recreation, but it was very undeveloped with no hall, apart from an old ex-Army shed near where the Scout HQ now stands. 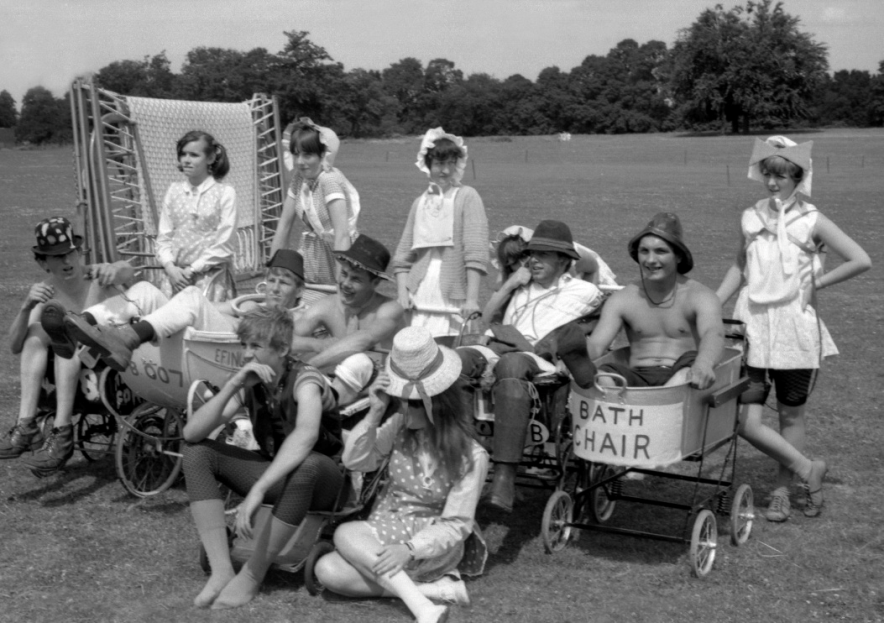 Apart from organised sports like football, in 1952 the fields were also used for popular village sports days. Picture of a 1960s sports day. 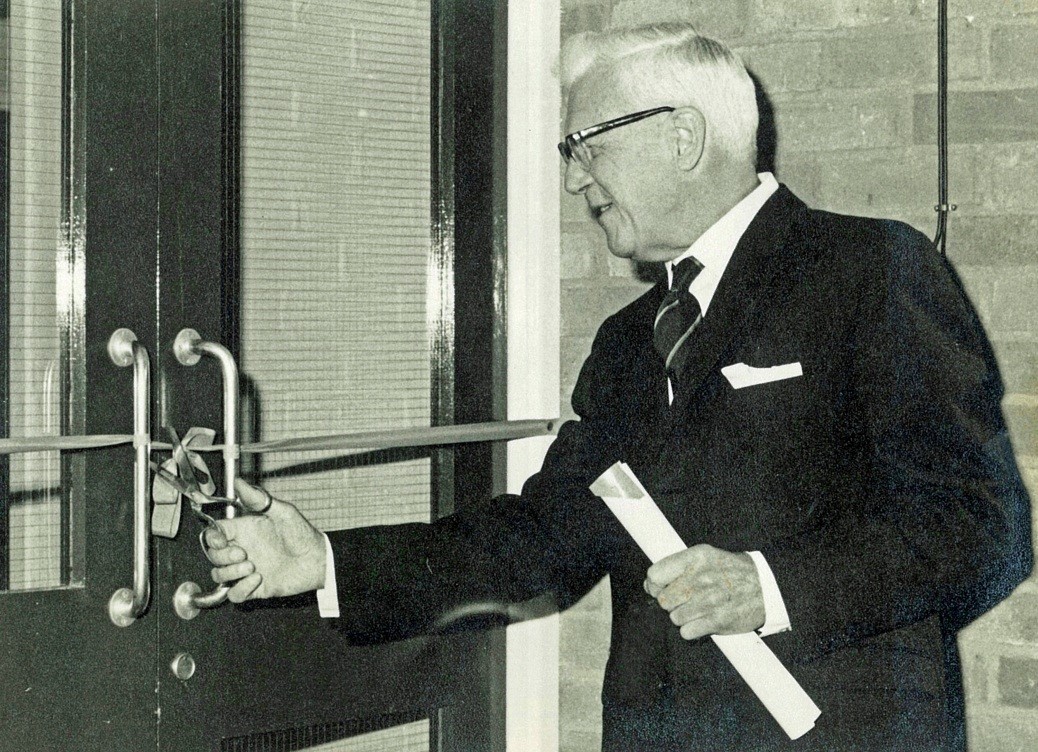 The Parish Council had become the custodian trustee of the KGV in 1949 and in February 1951 the Charity Commissioners approved the Charity Scheme for the Administration and Management of the King George’ Field Charity. A Committee of Management was elected at a public meeting with Barnes Wallis being one of those elected. He chaired the committee until 1955. He is shown here opening the new KGV hall in 1966.

These displays have been produced to illustrate what Effingham was like in 1952 when Queen Elizabeth II ascended to the throne.

Special thanks to Sue Morris for her help and for information and extra photos from the Parish Council, Effingham Village Recreation Trust, Effingham Local History Group and Effingham Residents Association.
But all mistakes are mine!
Vivien White