On Saturday 3rd December 2016, the Effingham Local History Group held its third major exhibition in the KGV Hall. This free exhibition, entitled “The People of Effingham during World War 1”, represented the accumulation of more than 5 years’ of research into how the village was affected by the Great War. Detailed accounts of the wartime lives of many of the survivors and the Fallen from the village were shown, alongside a wide selection of photographs, about half from the albums of the Ross and Pauling families, and the remainder from a wide range of contributors. These fascinating photographs, some of national importance, depicted both the young men of Effingham about to embark for war and War-related activity in the village, such as troops marching along The Street and Belgian refugees and injured servicemen being looked after in the village. Other photographs showed Effingham women assisting in nursing at Clandon House and welcoming returning servicemen at Waterloo. Complementing this material were accounts of life in Effingham during wartime, from both residents and contemporary newspaper articles. Visitors also had a unique opportunity to view a display of rare World War 1-related objects with specific connections to Effingham people. Members of the Group were on hand to share their knowledge of historical Effingham, and to offer advice to visitors on how to trace their family history during this period. A soundtrack of music from the early 20th century, along with photographs projected onto the hall’s main screen, added to the atmosphere of the event. The afternoon concluded with an informative and poignant talk by the Group’s Honorary chairman, Dr Chris Hogger, on the life and military career of one of Effingham’s Fallen, Leading Stoker Reginald Wells.

Around 200 people visited the event and the Group has since received many compliments on the standard of research displayed. It is hoped that in due course the material will be collated into a book, to allow more people to have the opportunity to share this detailed insight into the wartime lives of Effingham people from a century ago.

Click on the picture to see pictures of the event 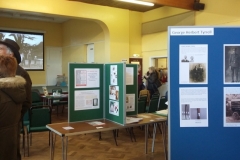