The numbering of public Rights of Way, which includes footpaths, bridleways and byways is a mystery to most people. Those within Effingham and surrounding areas are shown are the website under the “About Effingham” and can be accessed here

A more detailed map showing footpath 75 is shown below 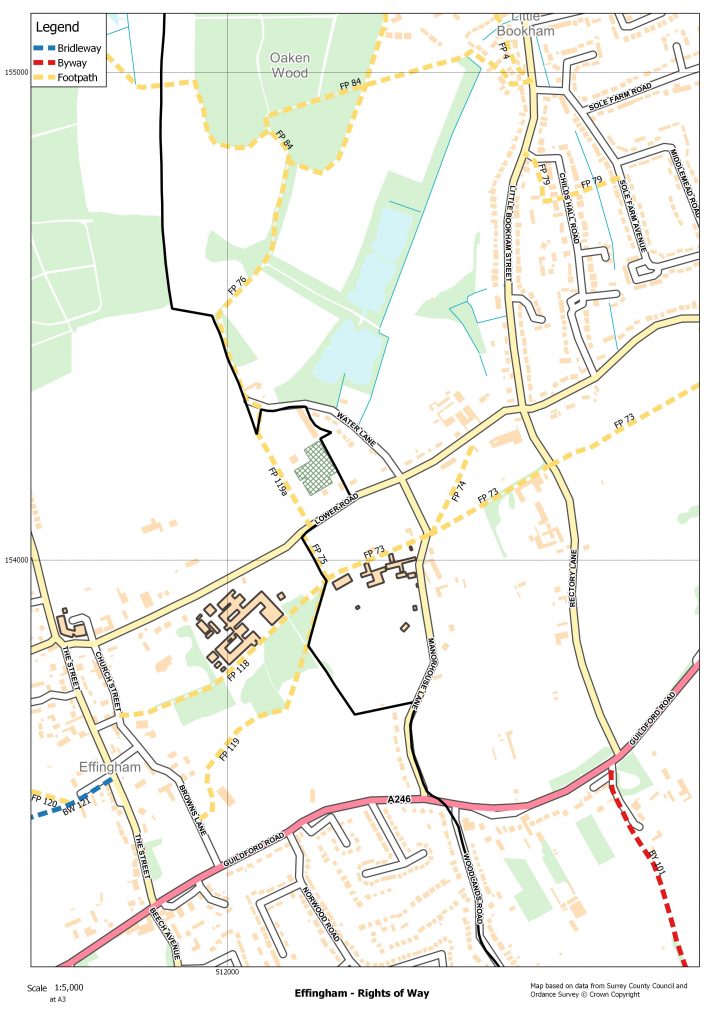 Footpath 75 has not always been in its current location, running along the eastern side of the hedge which forms the parish boundary. The original route of the footpath is a direct line from the western side of All Saints Church graveyard, north towards to Dunglass Farm and then continues on towards the Keepers Cottage (now demolished) at Oaken Wood. The footpath is shown marked on the 6″ Ordnance Survey map, which was surveyed in 1869 and published in 1873, click here.

The original route of the footpath was most likely been in existence for hundreds of years, being the route to the church from the farm. The section between Lower Road and the Dunglass Farm is now known as Footpath 119a (the footpath that runs alongside The Vineries). The section of the footpath north to the Keepers Cottage has been lost, and public access is now along the northern part of Water Lane, and in Rights of Way speak, Footpath 76.

Between surveys is 1894 and 1912, the Ordnance Survey maps show a new footpath had been created which ran diagonally from the parish boundary in the south across the field to join All Saints Church footpath at Lower Road. The 1912 map also shows The Vineries.

The 1934 survey (published in 1936) shows the two footpaths have been moved to run along the parish boundary. The Allotment Gardens are shown on the map on the northern side of Lower Road. Effingham Allotments have since moved to the west of the village.

Interestingly Footpath 119 which runs across the KGV playing fields used to run to the corner of Browns Lane with the A246.

2 thoughts on “History of Footpath 75”