Widespread vandalism has occurred in Effingham. Many Effingham residents are opposed to the development of 295 houses on the Green Belt and the large expansion of the Howard of Effingham School. Many residents had put up posters saying “No to the Appeal and the 295 houses” around the village. On Wednesday 17 May, the same day that the Inspector to the Public Inquiry into the Appeal was conducting a site visit, a large number of posters were torn down or defaced, boards removed, and posts broken, around the village shortly before he was due to arrive. Many of these posters were on private property. Posters were removed along the A246 Guildford Road, The Street, Browns Lane, Lower Road, Effingham Common Road. Many of these posters had been up for several weeks without any problems.

Is this the bullying actions in trying to deny the democratic right of residents to express their views in opposing the development?

We are seeking further witnesses and would ask residents to contact us if they saw anything or have anything relevant recorded photographically or on their Dashcams. Please contact us via the online form here 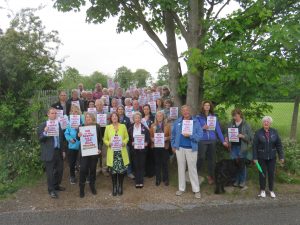